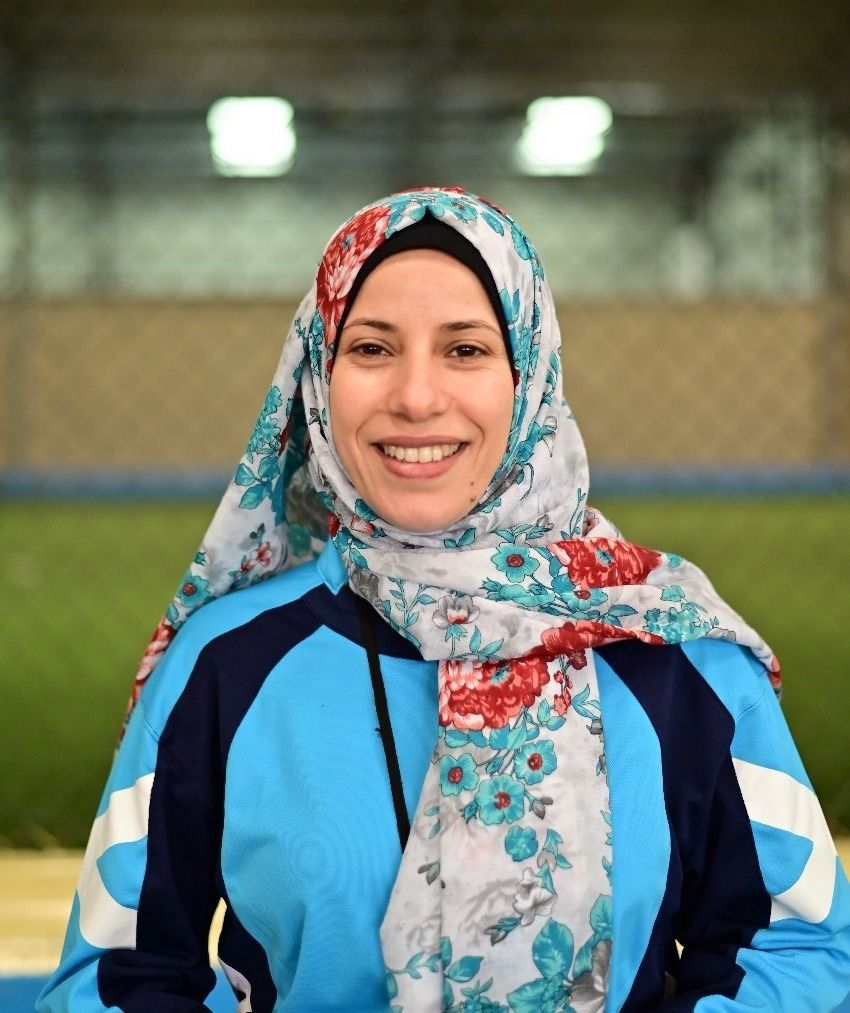 A life of learning: A Syrian refugee’s journey

Aid worker and community leader Qadriyah struggled through war, poverty, displacement and a patriarchal society to find herself as a Syrian refugee in Lebanon. One act of defiance turned her life around and saw her assisting other refugees, particularly women, access education and have hope for the future. Here is Qadriyah’s remarkable story.

Born in a sleepy village in the far south of Syria, in 1984, Qadriyah grew up hearing the dawn time call to prayer from mosques in neighbouring Jordan, with the border lying just a few hundred metres from her home.

She lived like any other child in Al-Muta'iya, Daraa province, excelling in school and preparing to enter secondary school until her education came to a shuddering halt when she was told by her family that she was engaged to marry a local teenage boy, without her consent.

Her uncles told her that school was no longer an option and that she must marry, appealing that she would be less of a burden on her family and was “ripe for the market”, as the saying goes in some parts of Syria. When she protested, she was beaten.

Reluctantly, Qadriyah married 17-year-old Amjad and moved to his family’s house, but soon found herself at the mercy of her new husband’s mother.

Just a few months later, after a quarrel with her mother-in-law, Qadriyah ran back to her family home.

At that moment, I felt that I could dream again. I will get divorced and go back to school, she said.

But the people in the patriarchal village soon gossiped about how the young Qadriyah could not cook or clean. They whispered she had consecrated her marriage, even though she had not, but undeterred, Qadriyah continued her education by studying her sister’s high school books at home. Pressure from members of the village about the rebellious Qadriyah built and her uncles concluded they could accept a widowed or dead woman in their family, but not a divorced one.

One day, Qadriyah was dragged back to her husband but before she reached the home, she managed to break free from her uncle’s tight grip and run back to her mother in a last dash to freedom.

Her brother, who had suffered a brain injury, hugged her tightly but he was beaten by the uncles and she was forced back to her husband.

With her dreams of returning to school shattered Qadriyah resigned herself to her fate, working day and night in the fields with husband Amjad. After the birth of their first child they moved to Lebanon hoping for a better life away from the constraints of the village with Amjad working in a restaurant and Qadriyah in a biscuit factory.

They soon saved enough money to buy a small plot of land in Al-Mutaiya and build a modest home but when they returned home to start a new life the regime laid siege to Al-Mutaiya after the outbreak of the Syrian Revolution.

Bombings, shootings, and arrests becoming a daily reality of life in their village. When Amjad’s brother died from torture in regime detention and her sister was shot at a checkpoint family members trickled over the nearby border to Jordan.

Amjad and Qadriyah chose to flee to Lebanon where they would be at least free from the constraints of the village, living in a modest apartment in a Palestinian refugee camp outside Beirut. Such was the harshness of their existence, Qadriyah would feed her children canned sardines laid out plastic bags, picking at the food but only eating when they were full.

One morning, waiting in line at an aid distribution point, Qadriyah noticed the men in charge of the operation would select the most attractive women for the food parcels, leaving the old and pregnant empty handed.

Although Qadriyah herself was selected for a parcel she could not bear the injustice and indignity and so she protested. An aid worker rebuker her: “Do you want to organize this mess? Take these forms and fill them all out with the information and addresses of refugee families, then bring them back to me.” And so she did, working late into the evening to complete every one of the 110 forms that were thrust into her hands by the aid worker.

The next day she returned them to the man and impressed with her work told Qadriyah she could oversee the distribution of aid to the other refugees. Overwhelmed with joy Qadriyah went to work and ensured all the families received their rations, who in return thanked her profusely from her help. Only after the families received their parcels did Qadriyah realise she had forgotten to complete a form for herself, but it marked an important point in her life from aid recipient to humanitarian worker and community leader.

The Lebanon conundrum – how do we educate refugees?

After witnessing firsthand, the corruption, mismanagement and favouritism that sometimes blights relief work, Qadriyah has decided to work with different organisations to provide education opportunities for refugees.

She now runs a chain of community centres that provide education and vocational training to refugees, particularly women, as well as raising awareness about their rights.

With so many refugees locked in a struggle to secure even the most basic of essentials, education has become a luxury for many families. It has forced families to send their children out to work rather than attending school, perpetuating this cycle of poverty and hopelessness they appear locked in.

Stuck in limbo, Syrian refugees in Lebanon know it is not safe for them to return home nor do they have the means to move to another country creating a state of uncertainty that limits their ambitions.

Qadriyah is well aware of the aid community’s role in this debacle.

“While many Syrian and Lebanese organisations seem committed to strengthening education and schooling programmes for refugees on the surface, they are all implicitly interested in satisfying their donors by achieving the required targets through distributing forged certificates or handing them out through corrupt channels,” she said.

This is what they really care about, not education itself nor students, curricula, teachers’ training, rights and fair wages.

A series of quick interviews with a group of refugee housewives in the suburbs of Beirut also revealed the obstacles preventing their children from receiving an education. Among the reasons was their inability to afford schooling which requires costs for books, stationary, uniforms, and transportation.

Many refugees are also dependent on the extra income brought in by their children’s work to pay rent, food and water, particularly after the deteriorating economic situation in Lebanon which is affecting citizens and refugees equally.

The situation of education in Lebanon is unique, even anomalous, with private schools - with medium to high tuition costs - constitute around 65% of the educational system in Lebanon, while free or semi-free public schools make up only 35%. Due to many of these schools belonging to a particular religion or sect it can also be assumed that students of a certain confessional background will likely be given priority during admissions over others from different faiths or nationalities.

The dominance of private schools and fragility of governmental and developmental policies failed to advance the public sector after the Lebanese Civil War - with some of the rot intentional due to factional interests and privatization – and further hitting public schools.

Many are based in crumbling buildings with dilapidated furniture and teachers controlled by favouritism and browbeaten by low salaries, although some schools are performing well due to support from local parties and powerful local political figures.

There are around 483,000 Syrian school pupils aged between 3 and 18, according to a 2018 UNESCO report. Most attend public schools, although these have struggled to absorb the large number of Syrian students due to lack of funding or sectarian factors.

Syrian students are also hindered by the emphasis on foreign languages in the Lebanese education system. The fact that exceptional circumstances have forced many Syrian students to drop out of schooling at some point necessitates the need for more emphasis and focus on their needs to ensure they can access public education.

However, there are some positive signs. Funding from international donors has helped more Syrian refugees access schools and avoided worst-case scenarios. The huge funds that were provided by INGOs bolstered the Lebanese Ministry of Education funds and led to a slight improvement in the situation for public schools.

One recent investigative report revealed that corruption - “the Lebanese way” - also affected the education sector, proving that once again financial exploitation is rampant in the grants system for refugee children. The Ministry of Education recently stated that 153,000 Syrian refugees were being educated in Lebanese schools, but the investigative report indicated that this figure was inflated by around a quarter.

Assuming that the numbers provided by the Ministry of Education are correct, the gap between figure provided by UNESCO (483,000 Syrian refugee of school age) and the number of students enrolled in public schools (some 153,000 students) is around 333,000 Syrian children.

Only a small number of Syrian children are likely in private schools given their limited financial resources and their distinct geographic location in Lebanon.

Yet despite the bleakness of this situation, the passion of individuals such as Qadriyah to offer Syrian children an education means that amid their darkness there is still light.

Between Homs and Tripoli: Hala chases her Ambition of a College Education